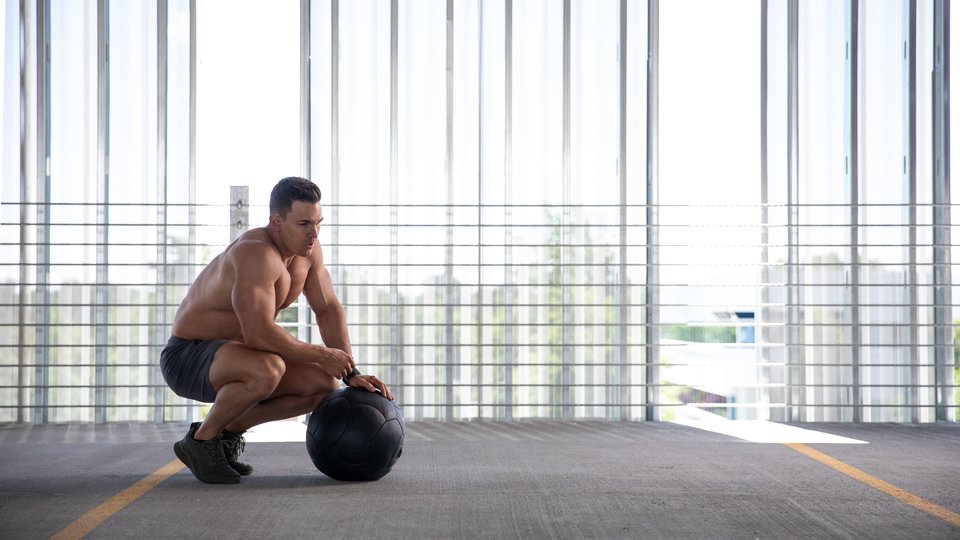 The medicine ball slam is one of those moves you’ll see people in fitness marketing photos doing all the time, usually with no shirt and an angry facial expression. But actual people in the gym? Not as much. But I’d argue they should be.

Why? Because the slam is a great total-body exercise for power development and metabolic conditioning. It’s basically a reverse vertical jump that teaches your body how to more quickly and forcefully load the ankles, knees, and hips. Building this critical counter-movement pattern will enhance your performance on vertical jumps, teach all kinds of muscles to work together, and drive plenty of other key athletic moves driven by triple extension.

Consider this article the definitive guide to slamming like a boss. First, I want to discuss the three most common slamming mistakes. Then, I’ll outline how to do slams with perfect form and technique, including the two best starting positions for success. Finally, I’ll share my 12 favorite slam variations, mixing between a slam ball and a traditional bouncing medicine ball.

You’d think nothing could go wrong with slamming a ball into the ground. But make no mistake, this is a movement that can be, and often is, butchered. In terms of mistakes, here are the top three:

In the case of number one, many people make the mistake of treating the slam like a downward crunch. Not only is this an inferior way to create and develop power, but explosive and loaded spinal flexion is a recipe for disaster. Focus instead on forcefully dropping your ass while always keeping your chest up and your shoulders higher than your hips.

Two, I see a lot of people who just bring the ball to chest or face-level instead of going all the way overhead. Just like with most exercises, partial range of motion will not allow you to fully maximize the return from your investment. The key to creating maximal power is to create a maximal stretch on the working muscles. The hip flexors and lats will be the two biggest drivers of the downward motion of the slam. To maximally stretch, load, and activate these muscles, you need to start from a full stand with your glutes clenched and your arms overhead. I’ll dig deeper into proper form later.

Three, and this should go without saying, the exercise is called a med ball “slam” not a med ball “drop.” Simply picking the ball up and then releasing, or lightly tossing it down, makes gravity do all of the work. Yes, you will lightly engage your leg, hip, and back muscles when you pick the ball up, but the most important part of the exercise is the downward motion using the force you create with your own muscles.

The 2 Best Ways to Slam

There are two primary starting positions for the med ball slam:

2. Arms bent at 90-degree angles with the ball behind your head 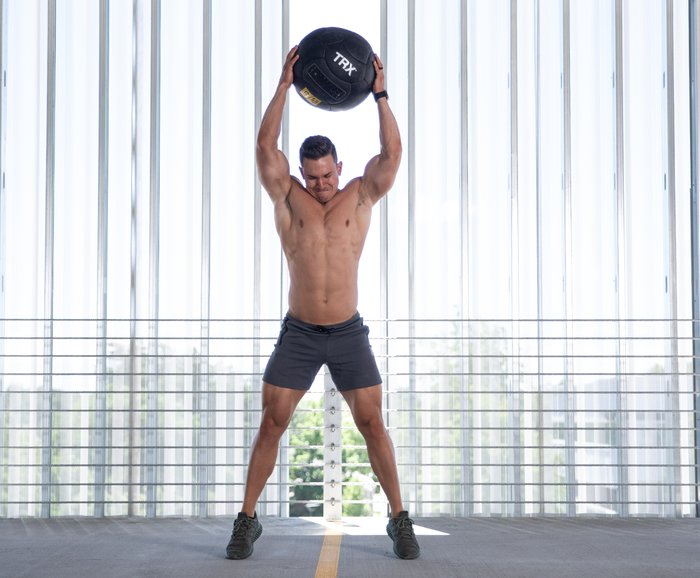 Both options have their place, and the one I use varies based on what training effect I’m aiming for, and the particular slam variation I’m using.

The first position is more conducive to training the purely up-down countermovement of the vertical jump and requires less overall shoulder mobility. You can either do this from a full stand with your feet flat on the floor or on your toes as if performing an isometric calf raise hold.

The second position maximally stretches both the lats and the triceps for greater arm and shoulder recruitment. And due to the unique placement of the ball behind your body, there’s a blend of horizontal and vertical movement that creates more of an arcing path for the trajectory of the ball.

For both positions, it’s critical to:

And regardless of which starting position you’re using, the finishing position is the same for both:

Now that we’ve got the basics out of the way, let’s jam out to my 12 favorite slam variations (ideally while listening to an old-school banger like “Slam” by Onyx).

The slam is kind of a melting-pot move since it works your whole body. So depending on what training day it is, plug it into a circuit as a core or cardio move. Or use it to train power on any upper- or lower-body day.

Dead-stop training dissipates some of the stretch reflex in your connective tissues putting a greater burden on your muscles to create the movement. Hold the starting position for anywhere from 1-5 seconds before each slam.

I love this for training maximal power in the 5-10 rep range. It’s also great for fine-tuning form and technique and keeping the rep quality at a premium. This is best done with a slam ball. Looking for an insane fat-loss finisher? Set the clock for 5-10 minutes and complete max reps for time.

The slam ball is the best option for creating pure power since you can fully unload it to the floor without fear of it boomeranging back and hitting you in the face. But bouncing slams are better for a faster rep speed and higher reps. 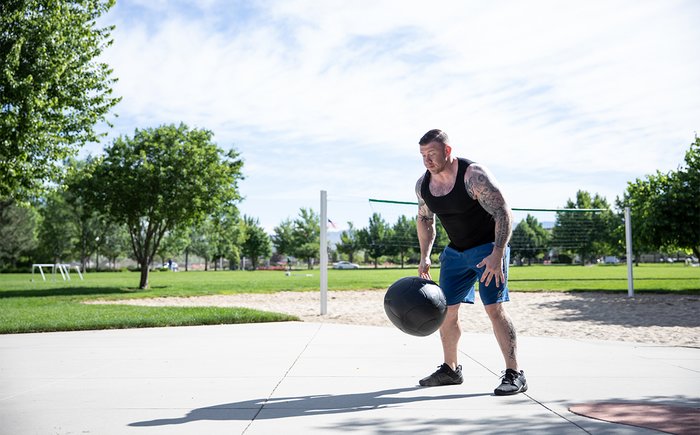 I like sets of 30-60 seconds with a heavier ball and sets of 90-120 seconds with a lighter ball. Bouncing slams also work well with modified Tabata protocols or 20/10 HIIT intervals.

I came up with this variation out of necessity for the members of my website since many people can’t slam a ball at home. But it’s actually a killer variation in and of its own right.

Faux or Fake Slams require you to both accelerate and then quickly decelerate the ball within the same rep. Since you have to really squeeze the hell out of the ball to ensure it doesn’t leave your hands, it’s also great for strengthening your grip and dramatically increases core, chest, and arm activation.

The halo, where you pass the ball around your head in either a clockwise or counterclockwise motion, is an awesome drill for core stability and shoulder mobility. Combining it with the slam is a great way to get more done in less time.

The drop squat is one of my favorite lower-body plyo drills as it helps prepare your body for the deceleration demands of squat jumps. Start with a closer stance than normal and immediately jump your feet out wide and drop your hips as you slam the ball to the floor. Reverse the movement and repeat for time or reps.

I like creating a lot of turnover on this drill, so the bouncing ball is the best option in my opinion. Sets of 1-2-minute work periods are unreal for metabolic conditioning. Please note that this is also the only slam drill where it’s OK if your arms don’t fully extend at the top of every rep, especially when using a continuous motion.

One of the most undertrained yet essential athletic movement patterns is hip rotation with pivoting feet. That’s why I love slamming side to side in a rainbow arc. Focus on keeping your bellybutton forward throughout the drill to prevent any unwanted rotation through your lower back.

This can only be done with a slam ball if you possess exceptional lower-body mobility, otherwise there’s too great a risk of rounding your spine. The bouncing ball is better for beginners and taller athletes.

Adding lateral movement and tapping into the frontal plane is critical for training balance and complete hip development. Just be sure it’s more of a sidestep, not a lateral lunge. If you use too much range of motion on the step, you’ll lose the ballistic benefits of this drill.

Use the bouncing ball for faster rep speeds and the slam ball for more power. Again, like with Rainbow Slams, only use the slam ball option for this variation if your mobility is on point. Either do all your reps to one side at a time, or alternate sides each rep.

The slam is already a metabolic nightmare, but adding a sprawl will catapult you into pure face-melting mode. This drill can only be done with a slam ball. First, master the sprawl into a plank position with the arms fully extended before progressing to the bottom of a push-up.

Since it’s a combination exercise where each rep takes 3-5 seconds or longer to perform, it’s best utilized for longer 2-3-minute work periods or more for fat-burning cardio.

There’s nothing wrong with progressing to heavier loads on these variations. But unless you’re as strong as the Mountain from Game of Thrones, you’ll never need to go heavier than 20 pounds with slams, and most people will find the sweet spot between 5-10 pounds (especially in the beginning).

Why go light? If the ball is too heavy, it becomes impossible to properly train power. In addition, you can increase the relative loading demands by progressing to the single-leg variation. I think mastering this drill is a prerequisite before attempting single-leg jumps. After all, you’ve gotta learn how to load before you explode.

This drill is all about balance and stability so start light and really take your time on each rep. I like sets of 45-90 seconds per side for best results. Feel free to use a little back-foot assistance whenever needed with the goal of going unbroken without assistance down the road. And I’d only recommend using a bouncing ball for this one.

This is a twist on the previous variation that works your chest more. Plus, the glutes, hamstrings, and lower back get lit due to the single-leg hip-hinge iso-hold.

I like sets of 45-90 seconds per side, with a bouncing ball only. Start with the classic two-arm version, and then progress to the alternating arm action to work one side at a time and create an even greater stability challenge for your lower body.

This is the exact same drill as the previous one except you’re doing it on both legs with a wide stance. The added stability and strength will allow you to go heavier and harder. I dig sets of 30-60 seconds with a heavier ball and work periods of 90-120 seconds with a lighter ball.

If you’re using a slam ball, don’t just push the ball through the floor; try to pull it back to your chest as quickly as possible once it hits the floor as if performing an explosive bent-over row. A bouncing ball will eliminate the upper-body pulling component.

This variation crushes the core and requires excellent stability and balance from your lower body since you’re using a split stance. But it really only makes sense with a bouncing ball.

You can slam it a bit harder each rep with your legs straighter. But if you want to work your hips and thighs more isometrically, hold the bottom of a lunge or split-squat position with the back knee hovering just above the floor and use softer slams. I like 1-2 minutes per side for this drill.

Somewhere, a medicine ball is waiting for you to slam it into the ground. Let Hannah Eden show you how in FYR 2.0: Hannah Eden’s 8-Week Muscle-Building Fat-Loss Program! In this follow-along video program you’ll use balls, bells, and your body in unique and challenging complexes that will push you to the limit!