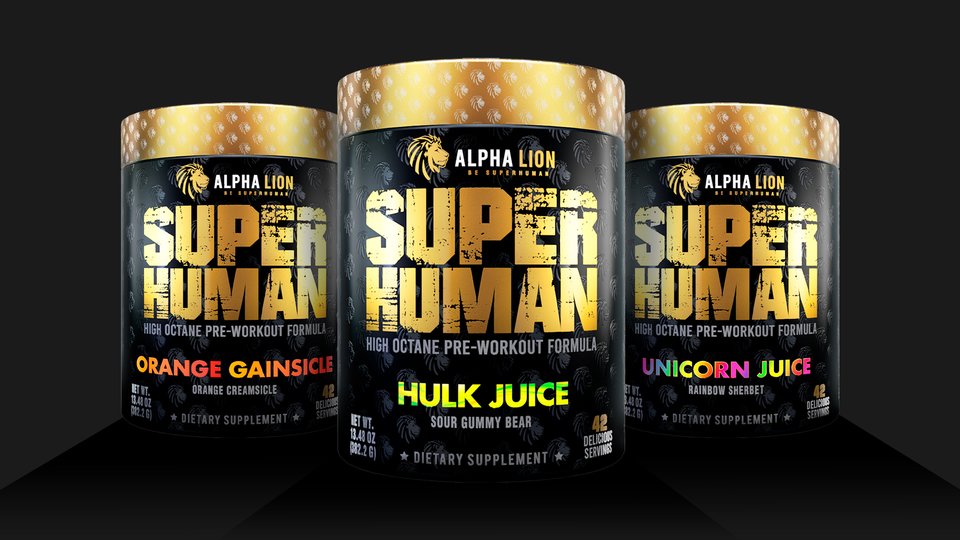 Nearly three years ago, Jordan Fares and Troy Adashun launched a supplement company called Alpha Lion, relying on the latter’s YouTube audience as an initial customer base. Fast-forward to late 2019, when the two serial entrepreneurs placed their flagship product, SUPERHUMAN Pre-workout V2, on Bodybuilding.com, where it quickly leaped into the top-25 best-selling products list.

Darin Decker, associate director of partnership development at Bodybuilding.com, rattles off four reasons for SUPERHUMAN’s overnight success: “First, customers love the flavors. Second, it’s a high-performance pre-workout guaranteed to amplify your workout. Third, their products are fully dosed, and their labels are transparent. Fourth, their partnership with Vitamin Angels [a philanthropy] makes you feel even better about what your dollars are supporting.”

Remarkably, the two founders have built this business despite visa issues that have prevented them from actually meeting in person more than three times—once in Colombia, twice in Mexico. Today, Jordan is based in Medellin, Colombia, where the clothing part of their business is manufactured, whereas Troy relocated from Florida to Southern California. 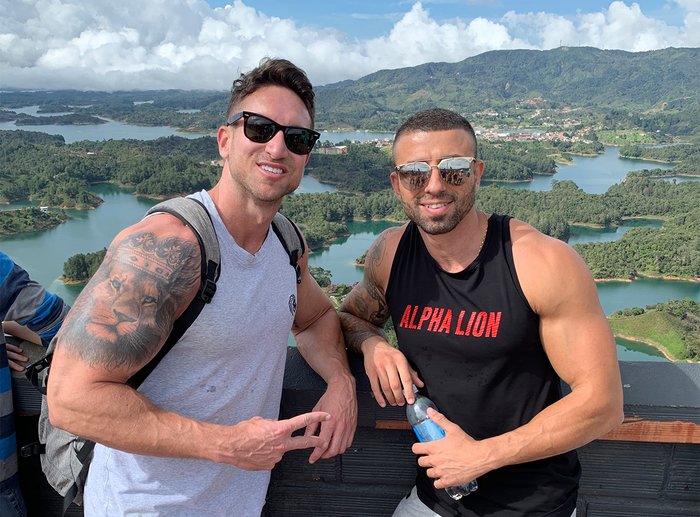 Despite having met in person only three times, Troy Adashun (left) and Jordan Fares have built Alpha Lion into a fast-growing supplement company.

To find out what’s driving this brand to success, I had the chance to interview both founders by phone from their respective locations.

Bodybuilding.com: You’re both very candid on your website about past ventures that didn’t do as well as Alpha Lion is doing. I feel that successful entrepreneurs and bodybuilders share the quality of perseverance. Do you agree?

Jordan: 100 percent. We’ve each had our fair share of disasters, but we’ve always picked ourselves up and kept going. That’s the genesis of Alpha Lion. After those failures and the resulting lessons, we met each other at the right time. Now, we’re seeing some success, but those past failures informed our current success.

Troy: Definitely. There are two types of people, in my opinion. There’s one type where, when failure happens, their dreams are immediately shattered. Jordan and I are both the second type: When we fail, we only grow hungrier, and we try to learn from that experience and take it on to the next experience. Jordan and I met at a time when we had both failed for about the same length of time. We were both really hungry. We had both learned a ton through our failures, and we just connected on so many different things. It sounds insane to people how we started Alpha Lion and actually got it off the ground without ever meeting in person, but we were so hungry to succeed after all of our years of failure in the fitness industry.

It’s unusual for partners to vibe so well while barely having met. Normally, you would think building rapport and trust would require closer contact.

Troy: It definitely is unusual, but honestly, I feel like our communication is probably better than, say, two entrepreneurs who are always together in person. Even the first year, it was pretty much all about business. Every time we spoke, I felt like it was always about strategy, marketing, and product development—all things that moved the business forward. The first two years, we pretty much chatted every single day, including weekends, on moving the business forward in one way or another. So, it worked out well, and I think whether you’re together or separate, if you can communicate well, it can work.

Jordan: The big change for me was going from always thinking, “What’s the best way to make money?” to making it more about helping people. That’s when we started seeing success. It’s hard to have that kind of mindset when you’re 20 years old. Not many people do. Everyone’s sort of chasing that dollar. But we made the transition with Alpha Lion. Now our focus is, how can we help our customers be their best.

Troy: Definitely. We want to create really exciting products and inspire people to be more active, to get into the gym more, and to motivate themselves outside the gym, as well. For instance, many of our emails to customers are about motivation and success outside the gym. So, from day one, we wanted to establish that Alpha Lion is so much more than a company that sells supplements. It is about creating more of the lifestyle and mindset of an Alpha Lion. 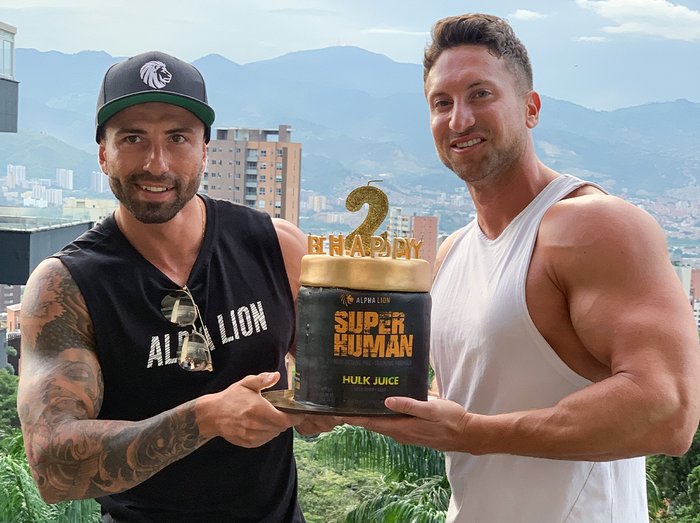 Yeah, Alpha Lion as a brand name says a lot. You don’t need to read between the lines. When you created the company, did you feel that you were speaking to guys like yourselves?

Jordan: We launched with two products: Alpha Shredder, which is fat loss, and Alpha Dreams, which was nighttime recovery but also with a fat-loss angle. Initially, we were definitely targeting guys like ourselves, but we’ve pivoted a little bit from there. We’ve been looking more at university students. We’re a male-dominant brand, but interestingly, 20 percent of our customers are female, even though we don’t target them. Those customers tend to be hardcore, alpha-type females.

Troy: We have more of a deeper, long-term marketing strategy. We want to appeal to guys who are just getting in the gym and who are motivated to make a change in their life through fitness. I see fitness as a huge catalyst to spark changes in all facets of your life. Not just looking better, but maybe wanting to start a business or just do something unique with your life. And after we acquire a customer, we focus on giving them the best value possible in terms of workouts and diet and free tools on our content hub, Superhuman You, and videos on our YouTube channel.

If Alpha Lion is a lifestyle, and you alluded to that a minute ago, what does that lifestyle encompass?

Jordan: It’s the freedom to do what you want when you want and to do something you love. We’re trying to reach people who are working a 9-to-5 job they hate and help them escape that rut and pursue something they love. We were both in the same rut, working desk jobs and hating it. We took it upon ourselves to change everything. Obviously, we work long hours, but I just got back from a week in Mexico, where I was able to take my laptop and work from the beach. That’s the kind of lifestyle we’re creating, and it’s what we want for Alpha Lion customers.

Troy: To me an Alpha Lion mindset is understanding that you can make happen whatever you want to happen, if you’re willing to put in the work. I feel like a lot of people have a mindset of being a victim. They think life happens outside their control. Obviously, sometimes that’s the case, but to me, an Alpha Lion mindset is understanding that if you put in the work and stay focused, you’ll succeed. It might take a couple of years. It might take five years. It might take 10 years. But everything you learn along the way is invaluable life experience. So, we can inspire people to start their own business, to do their own thing, to think outside the box and really go for their dreams—that would be a huge win for us. 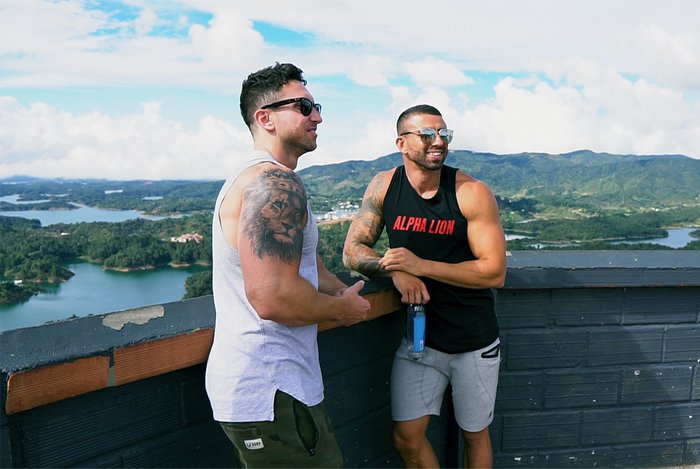 What’s in the product pipeline?

Troy: We’ve got a lot that we’re working on. We stand out with our product names and our branding. But in terms of R&D, we’re looking at bringing new ingredients to market that no one else is using, including an exciting fat-loss ingredient. We’re working with a couple of companies at the moment to execute on that, as well as creating our own ingredients.

Jordan: We’re also aiming to become even more transparent than we already are. We’re going through the Informed Choice certification as we speak. Consumers are becoming smarter about what they buy. We want to provide third-party certifications before consumers even ask.

Troy: As well, there’s going to be a huge focus on SUPERHUMAN. We’re basically going all in on SUPERHUMAN, and we’re going to roll the whole pipeline of products around that name.