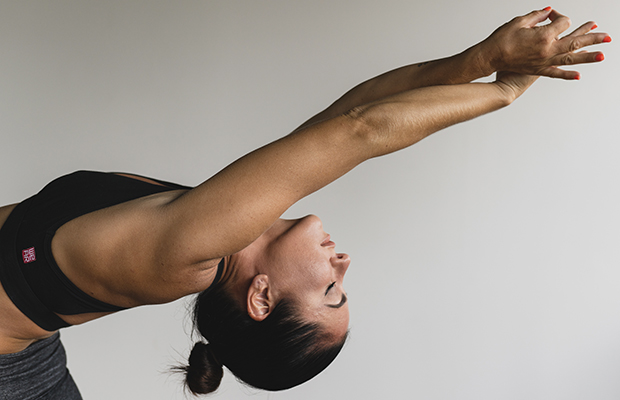 Picture this yogi: You’re in your flow, moving through asanas with ease, and having an om-azing time on your mat. Then, just as the Zen starts to really kick in, you pull your hips up into your umpteenth downward-facing dog, and suddenly you feel one of the telltale symptoms of (dramatic sound effect): yoga butt. “This is most likely a burning, discomfort, cramping, or pinching high up in the hamstrings, close to the pelvis,” says Ariele Foster, a physical therapist and yoga teacher based in Washington, DC.

Fear not peaceful warrior. You’re about to learn exactly what yoga butt is, what causes it, plus how to fix it because even if the name sounds a little silly, a yoga butt injury is actually no laughing matter.

On the contrary, it can be a real pain in the you know what, especially if left untreated, which is why it’s important to understand how to recognize and recover from a yoga butt injury if you have a regular yoga practice — or dance or martial arts, for that matter — as there’s a good chance you could experience it yourself at some point.

What is yoga butt, exactly?

Glad you asked. Yoga butt is, of course, just a casual name for what in most cases is medically referred to as a high-hamstring tendinopathy. “The tendon at the proximal portion of hamstring muscles is irritated,” explains Dr Foster. That’s the area near the smile line of your bum where the top of your leg meets your glutes.

Tendinopathy is a general term that encompasses anything from tendinitis (or inflammation/irritation of the tendon) to a pull, or a tear of the tendon, and it typically occurs when your body isn’t warmed up properly or more often, from overstretching, Dr Foster says.

Those are the two most common causes of yoga butt injuries, but there are other reasons you might be in this predicament.

READ MORE: 12 Things Your Yoga Instructor Wants You To Know

Another source of yoga butt is a stress injury created by relying too heavily on your hamstrings to hold poses rather than other muscles. This can happen even in very simple postures like going from standing to forward fold without rounding your back. “In yoga, there’s been a lot of emphasis on forward folds happening from the hips rather than flexion of the spine,” Dr Foster says. That could cause a stress injury if you do it enough times.

One easy modification is bending the knees slightly in asanas that require you to rely heavily on your hamstrings like the aforementioned forward folds, plus downward-facing dogs, or standing splits, Dr Foster says. This will put slightly less pressure on them, particularly early on in class before they’ve had a chance to fully loosen up.

Only working your hamstring muscles one way, over and over again (in this case stretching them), can lead to injury, similarly to how only learning to tighten your pelvic floor muscles makes them weaker than if you also learned to relax them properly.

This is a common issue in yoga due to the repetitive nature of certain yoga practices like Ashtanga, Vinyasa, and Bikram, which use a specific sequence of poses (or very similar sequences) every class. “What everybody needs is a variety of movement, and even though the yoga lexicon has a huge library of movement within it, we’re not really taking advantage of that,” says Dr Foster.

Something else that’s missing? An adequate amount of strength-building exercises, specifically for your hamstrings and glutes (rather than those that simply stretch these muscle groups), and that’s one thing that could be contributing to injury, says Dr Foster.

The solution here is to be mindful of how much time you’re spending stretching your hamstrings to ensure you’re not overdoing it — plus, make sure you’re adding a few hamstring strength-training exercises into your fitness routine regularly outside of your yoga practice.

Fewer yoga butt injuries are caused by this but it’s still worth noting that too much tension placed on the tendons that attach to the sit bones (the bones at the bottom part of your pelvis that you feel when you’re seated) can result in high-hamstring tendinopathy. It’s the result of overloading a tendon that isn’t strong enough, Dr Foster explains. If you meditate often in a cross-legged position or sit in an externally rotated pose like fire log, or lotus for a long time without enough strength in your glutes, it could cause hamstring pulls and even tears. All the more reason to strengthen your butt muscles.

Overdoing It After An Injury

If you’re recovering from a surgery or another hamstring injury, your body might not be fully prepared, and pushing yourself too much, too quickly could result in a yoga butt injury.

In that case, it’s best to take your practice slow (don’t go right back into a power yoga class) and to work on some strengthening exercises — both of which play parts in Dr Foster’s prescription for healing a yoga butt injury.

How To Treat Yoga Butt

If you’re already dealing with a yoga butt injury, the first thing Dr Foster recommends is seeing a physical therapist or doctor so that they can assess the extent of the injury and ensure that it doesn’t get worse. Until you see a professional, it’s ideal that you don’t stretch, since most of these injuries are caused by overstretching.

The best thing you can do is rest if you can. But if you’re itching to get back to yoga, especially for its mental health benefits, and your Doc or PT says it’s okay, try restorative yoga, which will be less intense, says Dr Foster.

Once you’re ready to get back to your regularly scheduled yoga programming, don’t push yourself too hard, as pain may manifest itself after class rather than during your practice. Dr Foster also suggests you skip any poses that you think might have contributed to your yoga butt injury, like lotus pose, until you’re feeling 100 and have had a chance to strengthen your hamstrings and properly. Here are some yoga-based exercises Dr Foster suggests doing prior to your yoga practice in order to engage and activate your hamstrings and glutes to help them get stronger.

This article was originally published on www.womenshealthmag.com