Well-known Stellenbosch-based triathlete Vicky van der Merwe is on the comeback after a break after her son was born. She will be competing at the Woolworths X TRI off-road triathlon in Elgin on Saturday 4 December.

Vicky van der Merwe: having it all as an elite triathlete and a mom

Top triathlete Vicky van der Merwe is also a business owner at Stellenbosch Triathlon Squad (STS), where she is a coach and race organiser, and in the last two years she has added wife and mother to her roles. The 32-year-old athlete is a familiar face on podiums across the country and internationally, and she is now focused on her return to competitive racing in short-course triathlon since the birth of her son Adriaan in February 2021.

She says being both a mom and an elite athlete has given her a new perspective: “The amazing thing is you have to make every session count as every opportunity to train is time away from the family. You have to be so intentional with your time. I love it. I always knew that I would return to racing, but I did not have a clear plan. It was my first pregnancy and I had planned a natural birth, and then I had to have an emergency c-section at 37 weeks – you really can’t plan these things!”

READ MORE: Boxing Inspired Workout: 8 Moves That Will Help You Get a Knockout Body RN!

“I threw myself in the deep end with training four or five weeks after Adriaan’s birth, and started slowly building up.”

Three months later she went to Africa Champs, claiming fifth place despite not having a great race. She feels optimistic about re-establishing her place as one of the top female South African triathletes. Since returning to competition with the 2021 Africa Champs, she has won the Walker Bay Xtreme Big 6, the Torpedo SwimRun (she holds the record), the Caveman Triathlon, the African X Trail Run, and recently the 2022 Cape Town Triathlon. 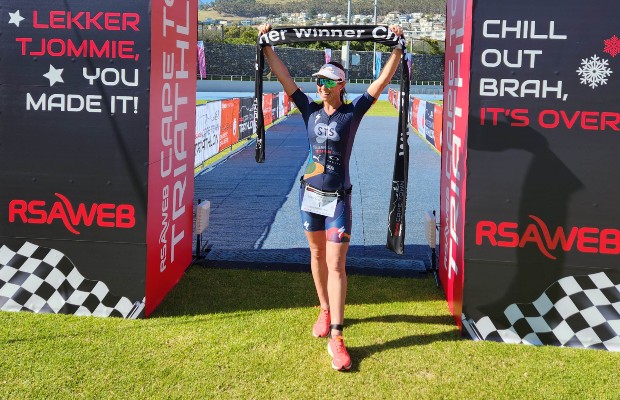 Vicky at the CT Triathlon 2022

READ MORE: “I Travel Solo Even Though I Have Anxiety — This Is How I Cope”

Vicky says she loves racing and has a few more years of competitive racing ahead. Her immediate focus is on the Woolworths X TRI the off-road triathlon on 4 December at Paul Cluver Family Wines Wines in Elgin. This race is a bit more about the fun, but a challenging event nonetheless if you are taking on the full triathlon.

“I find mixing it up a bit with off-road triathlon is so good for me as an athlete, and the WW X TRI is perfect for triathletes like myself looking to cross-train and test themselves in different disciplines. I will for sure be looking to stand on the top step of the podium, but this event really hits the mark for family fun as well, with a Lite event plus fun trail runs and a shorter walk.”

When asked if her goal is to qualify for the Paris Olympics, she is hesitant to confirm: “You obviously have to be in the top two or three in the country and we have some very strong women athletes. Because I’ve been out of it for so long, I have set myself small goals, with SA Champs being my next big one in March next year.”

With some confusion for the layperson about what constitutes a triathlon, Vicky sums it up, “Triathlon is any race involving a swim, a cycle and a run. There is off-road triathlon where the Xterra World Championships is the highest honours, then Ironman, full and half, that are more focused on endurance, and the World Championship held in Kona in Hawaii is the big goal. Then there is the Olympic Triathlon which is my discipline, and I prefer the sprint or short-course which is a 750m swim, 20 km cycle and 5km run. Standard Olympic Triathlon distances are 1.5 km swim, a 40 km bicycle ride and a 10 km run.”

READ MORE: What Happens To Your Body When You Stop Working Out?

As someone who was National and African Junior Triathlon champ when in high school, Vicky has triathlon in her veins, and beneath the fun and bubbly personality is a fierce competitor who juggles being a wife and mom, a businessperson, a coach and an athlete.

Get to Paul Cluver Family Wines in Elgin on 4 December for the WW X TRI to catch Vicky in action and support the work of the Woolworths Trust, the beneficiary of all proceeds from the event.  For more information and to enter visit www.wwxtri.co.za