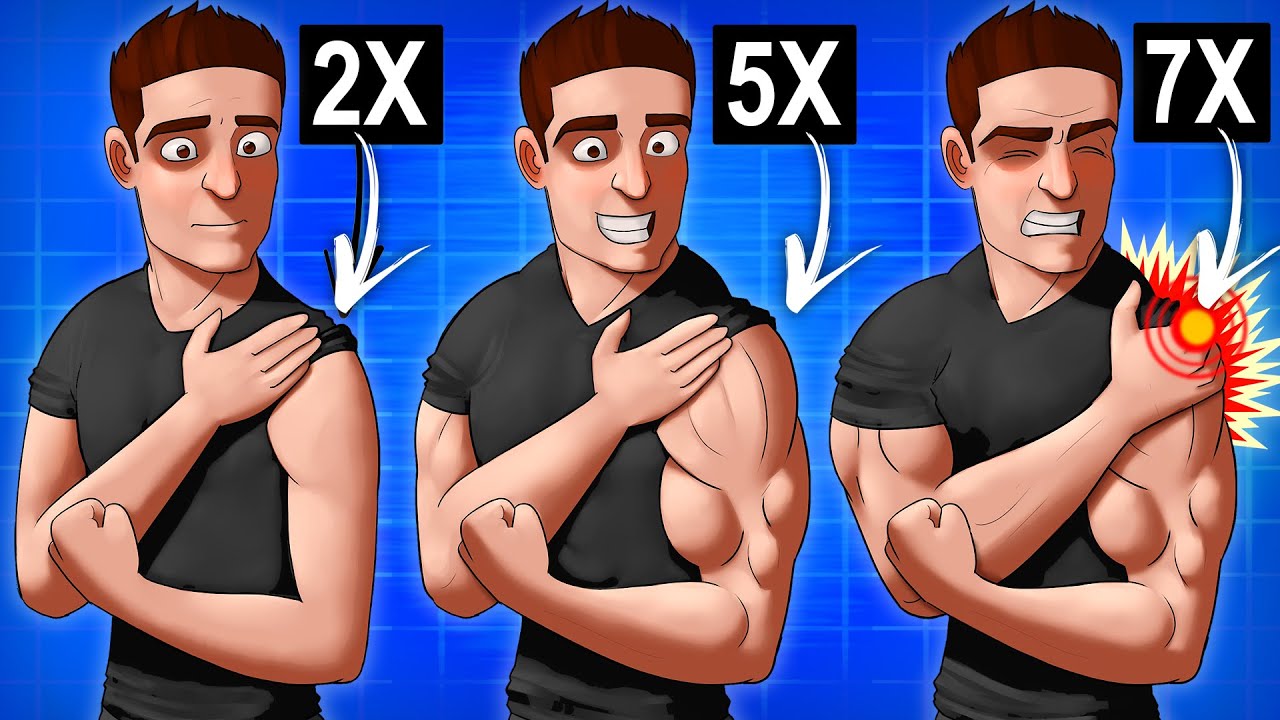 Fitness Workout
Share on Facebook
Share on Twitter
Share on Pinterest
Share on LinkedIn
Should you work out 3, 5, 6, or 7 days a week for optimal results? Find out how many times a week you should work out and the best workout split for you to build muscle faster. Training 3 days vs 6 days requires a different approach. Deciding on whether to do full-body or split training is another factor reviewed in this video. So whether you just want to find out how often you should bench press or if you want detailed planning on how to set up your weightlifting routine, this video will help.

We only have 24 hours a day, and 7 days a week to build muscle, burn fat, and improve our body composition. Since time is so limited many people believe that they can condense their workout to no more than 3 days a week while still achieving optimal results. Meanwhile on the other side of the spectrum…is the belief that you can get much faster results by working out more frequently, so 5, 6, or even 7 days a week. Some advanced athletes even swear by double training sessions where they train once in the morning and once at night multiple times a week. So which is best?
Common sense would make it seem that working out more often will automatically lead to more muscle growth and better overall results. And this is true to a degree. To maximize muscle growth, you have to do enough training volume. To put it simply total training volume is essentially sets x reps x weight load. So if you keep everything else the same in your workout but find a way to increase either the number of sets, reps, or the weight load that you’re using every week you’re increasing total training volume, which is a potent stimulus for muscle growth. In fact, a meta-analysis found a dose-response relationship between training volume and muscle growth. The more sets people performed, the more muscle they put on. (6) Other studies also come to the same conclusion. (7)

So, which workout split do you think will be easier to get a higher training volume out of? Well if you’re only hitting the gym 3 days a week it’s most likely going to be harder to hit all the muscles in your body with the same amount of sets, reps, and intensity that you would be able to get out of hitting the gym let’s say 5, 6, or 7 days a week. If you work out 6 days a week for example you can use a split training routine like chest and back on one day, legs the next day, and shoulders, biceps, triceps, and abs on the 3rd day. Then take a day off and repeat the entire process. With this split, you’d be breaking down each muscle in your body twice every week, while still getting at least 48 to 72 hours of rest for each muscle group between workouts.  Meanwhile, if you’re only training 3 days per week and you try a split training routine where you spend day 1 working specifically on just chest and back, you’d still have to train the rest of your body during the other two workout days of the week, leaving no time for a second chest and back session during that week. A good way to get around this problem with a 3 day a week split is to train your entire body during every session.

This allows you to train each muscle more than just once a week and training a muscle more often has been proven to lead to more muscle growth even when total training volume is matched (20) In fact we have a randomized control trial where researchers evaluated the difference in muscle growth between training a muscle once or three times per week while maintaining a similar total training volume between groups. The results showed that those who trained their muscles three times a week gained much more muscle than the participants that worked out less often. (21) For example when researchers performed an ultrasound on a section of the quads known as the vastus lateralis there was a 6.7 percent increase for the 3 times per week group versus only a 2.1 percent increase for the 1 time per week group. (22) In another study (23) participants either performed all their weekly exercise volume in one giant full-body workout or spread out the same training volume over three smaller full-body sessions. And once again, those who trained more often gained significantly more muscle. The once-a-week group enhanced lean body mass by only 1% meanwhile the three-times-per-week group gained 8%, which is a huge difference and many other studies also show similar results.(24)

So we can say for sure that it’s not optimal to train each muscle only once per week. One reason for this is that you’ll be able to do fewer quality sets per muscle group. What I mean is, After you’ve already done a few heavy sets for a muscle, the amount of force you’ll be able to produce during later sets will be reduced. On the other hand, if you spread that volume out more evenly over the week, you’ll be able to push yourself and perform at a higher level during each set because you’ll be less fatigued at the start of each set….